“Within these walls, Pity will war with Death,
Conquer, and fail, and conquer yet again.
Here many a broken life will fight for breath.
Grave eyes will watch, and hearts grow numb with pain;
Till the new hope that makes the eyes grow blind
Breathes, and the long suspense breaks down in tears;
And quiet skill, content to serve its kind,
Turns to new conflicts, through uncounted years.

Here knowledge like a heavenly lamp shall shine;
And wondering children’s faces, peaked and wise,
Look up at kindly faces, and divine
The unchanging love that looks through changing eyes.
For Love that left high heaven to dwell with men
Looks, through men’s eyes, on His own children, then.” 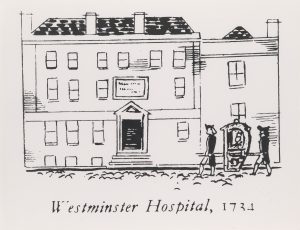 Alfred Noyes, (who is best known for his ever-popular poem ‘The Highwayman’), was one of many who have given their skills and energies to support causes close to their heart. The poet dedicated this poem to Westminster Hospital when funds were being raised for much needed refurbishment. His poem captured the ethos of the founding fathers – the ‘battle’ of Pity against Death, the sense of duty and service, all inspired by charitable giving.

Charitable giving has always been at the heart of Westminster Hospital. It was the first voluntary hospital anywhere in the world, supported entirely by charitable giving. In the founding document of the original hospital of 17161, Henry Hoare, William Wogan, Robert Witham and the Reverend Patrick Cockburn declared that the hospital should ‘provide poor sick people…with necessary food and physick during illness.’ Pregnant women should have ‘necessary provisions and a nurse during their lying-in period’. Ahead of the times, the hospital also aimed to help sick prisoners and foreigners were to have help arranging for their return to their native countries after treatment. 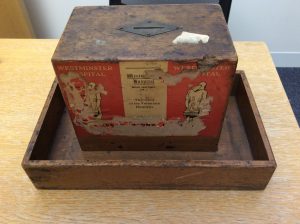 All of this was expensive. The first fundraising appeal for money, volunteer time and services, goods and even ‘broken victuals’ was perhaps an early version of now familiar charity shops and food bank appeals:

“Rich persons are asked to give money and others to send broken victuals, old clothes, linen, beds, bedding, chairs, stools, pots, dishes, glasses &: those of either sex to visit, comfort and read to the sick… and solicit subscriptions and physicians, surgeons and apothecaries to give their assistance.”

Music and the arts have always been excellent tools for fundraising and Westminster Hospital has received generous support from leaders in their fields. In the late 18th century, performances of the music of the London-resident George Frederic Handel held at St Margaret’s Church and Westminster Abbey, raised no less than 1/3 of the hospital’s entire yearly donations!2 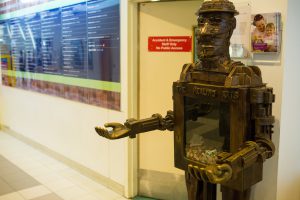 Artists of all kinds continue to support today. In 1997, Dr James Scott, former Surgeon and founder of the Chelsea and Westminster Hospital’s art programme, persuaded the pioneer of pop art, sculptor and artist, Sir Eduardo Paolozzi CBE RA to design a sculpture-cum-collection box to fund the hospital’s Arts Programme. It was cast in bronze by Chris Nash of the prestigious Arch Bronze Foundry and stands today in the hospital entrance, continuing to encourage donations.

Appeal leaflets have always been an essential tool for charity fundraising. Westminster Hospital produced many throughout the late 18th to early 20th century. One pamphlet from the hospital, distributed in 1923 was titled The Story of the Oldest Voluntary Hospital. It hits home with some impressive figures before cutting to the chase with an appeal for funds and a stern warning of the consequences if the money is not forthcoming (perhaps not quite the approach which would be taken today):

“SINCE the foundation of the Hospital, OVER TWO MILLION PATIENTS have been treated in the Wards and Out-patient Department.

Last year, 2,281 in-patients were admitted to the wards and the number of out-patient attendances recorded was 74,416.”

If the money cannot be raised, the Hospital will be saddled with a heavy debt which must seriously interfere with its work.”

The appeal worked, and a celebratory service was held at the reopening of the hospital in 1924 and the Prince of Wales visited in November that year to tour the new facilities. These included a new operating theatre, an Ear Nose and Throat unit, midwifery services and an essential hot water supply. A video of the ceremony can be found on the British Pathe website.

Aside from the big appeals and events, every charity needs the support for day-to-day running costs. The need for continuous donation income was a constant worry for voluntary hospitals. The best way to guarantee the financial security of the hospitals was through annual subscriptions from wealthy benefactors. Hospital founder Henry Hoare attended the first meeting ‘with £10 in his hand’ which he later converted to a subscription of 10 guineas a year. An early subscriber who followed suit was one Mr Elihu Yate, who said he would donate ‘until such time as a similar infirmary was built in his parish.3 Others followed, including enthusiastic support and subscription from the influential Countess of Portland. As governess to the children of George, Prince of Wales, (later King George II) she brought in the first Royal donation – the sum of £5 5s from ‘Their Royal Highnesses and the young Princesses’ in 1722.4

The idea of charitable hospitals caught the imagination of the population. The need for new Hospitals was acute. In the 1720s poverty, poor sanitation and overcrowding contributed to a sickly population and a shockingly high infant mortality rate – 74% of children died before the age of five years.5 There were only two existing hospitals for the general population in London – St Bartholemew and St Thomas’6. The founding of Westminster Hospital triggered a wave of new London hospitals, set up to ease this suffering. Within 80 years, London had 15 hospitals, some general and some specialist but all based upon charitable giving and the subscription of wealthy benefactors for the benefit of the needy.7

Photo above: Women collecting on ‘Flag Day’, 1923 –The hospital was fundraising for a major refurbishment which was to cost £70,000

Over 300 years, the Hospital’s charitable ethos has taken many forms. In 1948 the NHS took on the day-to-day provision of all hospitals with its similar aims, but the history of charitable support is now driven forward by us, CW+, continuing the proud tradition of extraordinary generosity for the support of this most special hospital.