World War I had a large effect on daily hospital life. In 1914, the Westminster Medical School was taken over by the army to train pathologists for the war effort. In 1916, women students were admitted to the Medical School for the first time to substitute for all the men who had gone to Europe. Women were once more barred from joining the Medical School after 1928 and weren’t to return until after World War II.

Strangely, this war led to a noticeable decrease in the number of outpatients admitted to the hospital. In 1916, it was recorded in Outpatients and the war: Experience of Westminster Hospital that the war led to a steady decline from 1,651 outpatients in the first three months of 1913 to 967 in the first three months of 1917. The article says that this was the case in hospitals across the country. It also says that it was not just the absence of a large proportion of the male population which led to this decrease: 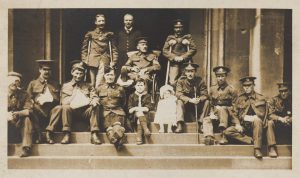 “Other related causes are in operation. For instance, the wage-earning power of the remaining males, individually and collectively, has increased; indeed, in some cases the wages earned are so enormously in excess of those obtained in normal times that men who would formerly avail themselves of hospital treatment are now independent of both hospitals and panel doctors, and are prepared to pay for advice from medical practitioners and to buy their own medicines. Then, again, in a large proportion of cases the wives of men in the Forces are better off than when their husbands were in civil employment, and consequently they and their children are better fed, better clothed, and sometimes better housed, with less illness as a direct consequence. Then, again, the remarkable growth in the employment of women at more than a living wage has further depleted the number of possible hospital patients, while the diseases of the highly-paid munition workers are sometimes those of plenty rather than those of poverty, and as often as not can better be remedied by abstention from luxuries than by visits to the hospitals.”1

So, a combination of factors led to fewer illnesses on home soil that needed hospitalisation during war time. As remarkable as this is, it is worth remembering that this was only possible as there was no actual conflict on British soil. World War II, during which London and other important towns and industrial sites were heavily bombed, was a different matter…

4 Outpatients and the War: The Experience of Westminster Hospital, in The Hospital, August 1916 https://www.ncbi.nlm.nih.gov/pmc/articles/PMC5227870/?page=1