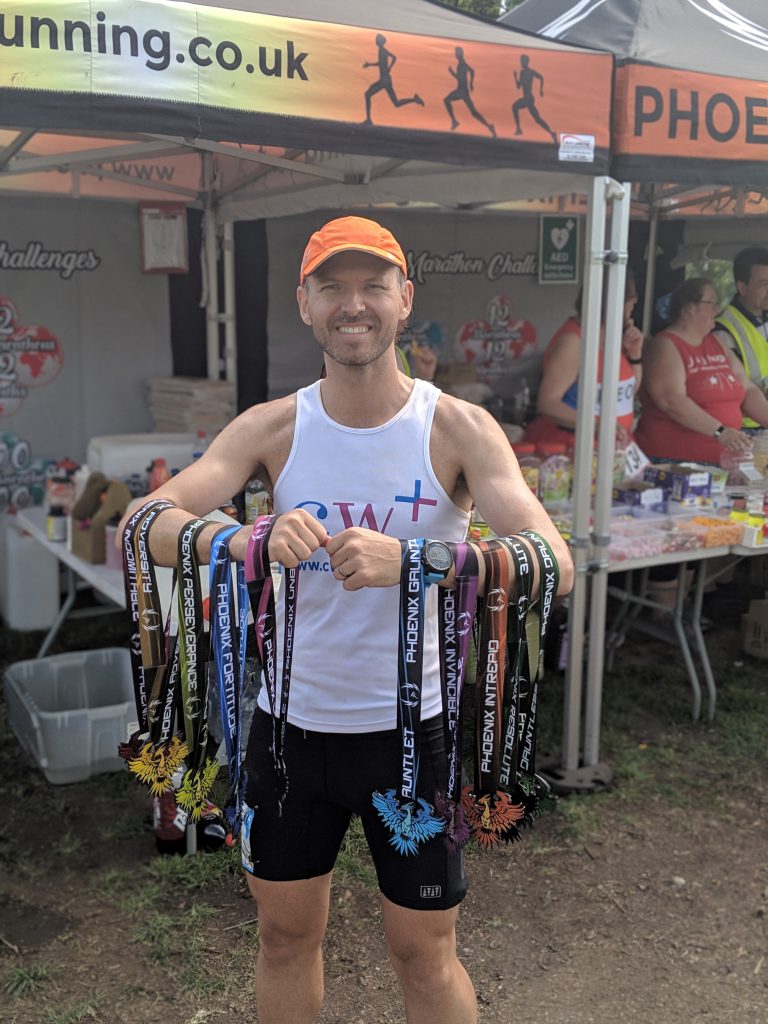 Simon McWilliams spent a gruelling ten days running ten back-to-back marathons in aid of the Neonatal Intensive Care Unit (NICU) at Chelsea and Westminster Hospital. Inspired to take on the challenge after both his sons received life-saving care in the Unit, Simon has raised more than £11,000 towards our Critical Care Campaign to expand and transform the Unit and provide care for 150 more critically ill babies each year.

In September 2016, Simon and his wife Nicole’s first child was admitted to NICU at Chelsea and Westminster having suffered major blood loss and suspected brain damage during birth. His prognosis was poor, and the couple prepared themselves for the worst. Their son spent a difficult five days in the expert care of NICU staff, before being well enough to go home. This was the start of several medical treatments and visits but 26 months later, he had made a full recovery and was discharged from any further care. Nearly three years on, he is now a thriving little boy.

In October 2018, Simon and Nicole were unfortunate enough to relive this experience once more, when their second son was admitted to the same unit for breathing difficulties. Once again, after receiving urgent care from the incredible Neonatal Intensive Care Unit staff, he was discharged after just five days and the McWilliam’s were able to take him home and start their life as a family of four.

To say thank you for the fantastic care that his sons received, Simon decided to run a super-human ten marathons in just ten days, to represent each day his sons spent fighting for their lives and the time that the hospital staff spent night and day, caring for them.

Simon commented, “While some people have mentioned my efforts were extraordinary, it is the work that the doctors and nurses do on a day to day basis that is truly amazing and inspiring, my wife and I cannot thank the wonderful NHS staff enough for what they have done for our family. It’s been fantastic to give back to Chelsea and Westminster for the continued care of other babies in need. A huge thanks to Phoenix Running for making this possible by arranging and hosting the ten back to back marathons.”

In total, Simon ran for 43 hours and 36 minutes, pounding a mammoth 262 miles. The £11,613 that he has raised for CW+ so far will go towards caring for more critically ill babies like the McWilliams boys. There is still time to support Simon here.

We launched the £12.5 million Critical Care Campaign in partnership with Chelsea and Westminster Hospital NHS Foundation Trust in 2017. Construction has now begun to significantly expand and redevelop both the Adult and Neonatal Intensive Care Units at Chelsea and Westminster Hospital. Due to complete in 2020, space on the NICU will increase by 40% and additional cots will be installed so that care can be provided to 150 more babies every year. We are creating a patient focused environment which will transform patient care and experience at the hospital. This innovative, new model of care and world-class environment will improve clinical outcomes, reduce costs, improve efficiency and reduce risks for patients.