HOW WEARABLES COULD HELP TACKLE SEPSIS

CW+ have supported a UK first research study, in partnership with Imperial College London and the Royal College of Surgeons, to evaluate a wearable patch to monitor three key indicators of patient deterioration – heart rate, breathing rate and temperature. For World Sepsis Day, The Institute of Global Health Innovation (IGHI) spoke to Meera Joshi, Clinical Research Fellow at their NIHR Imperial Patient  Safety Translational Research Centre, about how this can be used to tackle sepsis at our hospitals.

Our immune system serves to protect our bodies from threats, such as rogue cells that could turn cancerous, or infections that could harm our health. But the immune system can also go wrong, and do more harm than good.

This is what happens in sepsis, or “blood poisoning”, where the immune system goes into overdrive while attempting to clear an invader, such as harmful bacteria, and inadvertently attacks person’s tissues and organs. This life-threatening reaction is estimated to affect close to 150,000 people each year in the UK alone.

World Sepsis Day, on September 13th, seeks to raise awareness of this serious condition, which could take as many as 6 million lives across the globe each year. It’s also an opportunity to celebrate those who have made it their mission to tackle sepsis. We caught up with IGHI researcher, Meera Joshi, who is doing exactly that.

Why is sepsis such a major concern in healthcare? 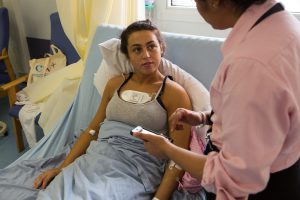 “Sepsis remains a massive problem, not only in the UK but globally. You only need to pick up a newspaper to spot recurring headlines; it’s a huge killer; as many as 1 in 4 people with sepsis will unfortunately die from the condition. And there’s been evidence to suggest that for every hour delay in diagnosis, the mortality rate goes up by 8%. Data show that if you pick sepsis up earlier, people are much more likely to have better outcomes.”

Why is sepsis tricky to diagnose?

“One of the main problems is that it’s hard to spot. There’s no established molecular marker that can be used to pick up sepsis to date; there’s no single blood test for diagnosis, either. There are markers that are sometimes used, but they lack specificity. Patients also often have vague symptoms that could be attributed to something else, meaning it can go undetected.”

What’s the aim of your research?

“One of the things we’re looking at doing is seeing if novel technology can help identify patients with sepsis sooner. One of the ways that healthcare professionals can check for deterioration of a patient’s condition on hospital wards is to measure their vital signs. Currently, nurses do this on wards around every 4-6 hours, checking things like heart rate, blood pressure, temperature, etc. But we know delays can happen in making these observation rounds. So there could be an opportunity for us to detect sepsis, and deterioration more broadly, quicker.

“We’re looking at new wearable technology, originally developed at the College, which can measure a patient’s vital signs more often, up to every two minutes instead of hours apart. We want to see if this can speed up the detection of clinical deterioration.”

How does the wearable work? 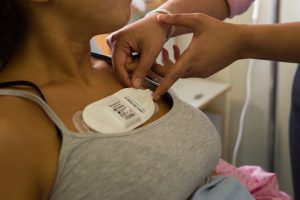 “It’s a lightweight wearable device that attaches to a patient’s chest via electrodes. The sensor records heart rate, respiratory rate and temperature every two minutes. Packets of data are then uploaded to the server before notifications can be sent to desktop computers or hand held devices used by clinical staff.

“We’ve been developing computer algorithms that will generate alerts when this data detects there is a problem. Through these, we’re identifying the best ones for nursing staff, so that the alert can be raised to nurses in real-time, as a patient’s condition is deteriorating.”

Could this sensor have other applications?

“At the moment our focus is on sepsis, but we are looking at any patient deterioration more broadly on hospital wards. 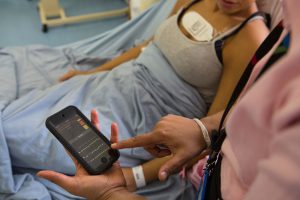 “We’ve just completed a study involving 500 patients at a North West London hospital, where we looked at all sorts of patients with a host of different conditions. Some patients deteriorated for reasons other than sepsis, so we want to see if we can apply this technology and algorithm for other causes.”

How have you involved patients and professionals in this work?

“We’ve been working closely with patients and healthcare professionals throughout all of this research. Out of the 500 patients in our trial so far, we’ve got questionnaire data for around 450 patients, to find out their opinions on the technology and whether they find them acceptable to use. We’ve also done in-depth interviews with both patients and staff, speaking to junior nurses, junior doctors, senior nurses and consultants, among others, who are all shaping our work for the better.”

What stage is your research project at?

“I’m coming towards end of my PhD now, for which I’m hugely grateful to my funders – the NIHR Imperial PSTRC, Royal College of Surgeons and CW+.

“Largely at West Middlesex University Hospital, so far we’ve looked at the reliability of the sensor, its potential for earlier detection, and lot of work with our patient and staff cohort to explore their opinion about device and the use of technology in healthcare.”

What do you hope to achieve with this work?

“I’m hoping we can use wearable technology in the future to help detect sepsis and patient deterioration quicker than is currently possible. And ultimately improve patient outcomes and survival; that’s the next step, to see how this can make a real difference to patients in practice.”